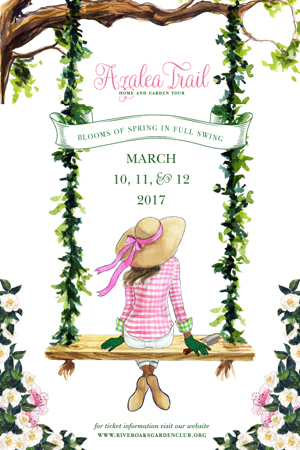 River Oaks Garden Club (ROGC) was organized in 1927 by 27 residents of the emerging River Oaks area. It was not until late April 1935 that they held the first “Garden Pilgrimage,” as it was known then. That first year, there were 12 gardens on the tour, five of which were on Lazy Lane. Proceeds from the tour were used to beautify the grounds of River Oaks School, known today as River Oaks Elementary. In 1936, the Pilgrimage became known as the Azalea Trail, as three gardens were opened in March to display azaleas in addition to the April Pilgrimage. People were unfamiliar with the beautiful azaleas because they were not native to the area, so ROGC used the Azalea Trail to educate the public on azaleas and horticulture.

The 1940s brought challenges to the Azalea Trail, as the war years led to severe shortages of plant material. ROGC members began to cultivate bedding and landscaping plants from seeds and cuttings and introduced the “Victory Garden” concept into landscape design at their own homes. The Victory Gardens incorporated vegetables into the borders of flower gardens and fruit trees into the broader landscapes – a practical shift from the isolated vegetable gardens and fruit orchards of the past. The ROGC Victory Gardens proved to be greatly appreciated by Azalea Trail attendees, setting the stage for a new interest in marketing fresh produce at the Greens Market held on the ROGC’s Forum building grounds.

Azalea Trail attendance continued to grow, attracting an impressive 10,000 visitors in 1945. Visitors that year included several thousand service men and women, who enjoyed the Trail as honored guests. Among them was a contingency of military officers, visiting Houston to lay the cornerstone for a new, 39-building Naval Hospital (this later became the Veteran’s Hospital). The officers accompanied military patients from McCloskey Hospital in Temple, Texas and were entertained by ROGC members for the entire weekend. Garden Club members hosted a series of social events, and, although ROGC had fewer than 50 members, ten gardens and three homes were featured on the Azalea Trail that year. These efforts were more important during the war years than any previous time. The Shreveport Times related the sentiment of those who attended the Trail, noting that, “The beauty of a garden is yours to keep, in your heart. We all need beauty now more than ever before. Our hearts are troubled and our minds are worried, but peace and beauty can be found in a garden filled with lovely colors and beautiful flowers.”

In 1948, the ROGC’s historic Forum building first opened as an information center during the Azalea Trail. Flower arrangements by members were also on exhibit, and member Frances Hannay published a pamphlet for the public called “Period Flower Arrangements”.

In 1982, The Mayor of Houston issued a proclamation, designating Azalea Trail Days and commending ROGC’s contribution to the historical preservation, conservation, and beautification of the city.

Today’s Azalea Trail offers Houstonians an enjoyable weekend that educates the public about architecture, flower arranging and horticultural possibilities in our region. Trail proceeds are given back to the community for projects in horticultural education, conservation and civic beautification.

This year marks the 82nd Annual Azalea Trail with Maudie Beard and Terry Harmon serving as chairmen. ROGC is proud to continue to feature Bayou Bend Gardens, Rienzi, and the Forum of Civics Building on the tour, along with four magnificent homes and gardens located in River Oaks. The ribbon cutting, which opens the Trail, will be held on Friday, March 10, at 10:30 AM at the Bayou Bend Lazy Lane entrance.